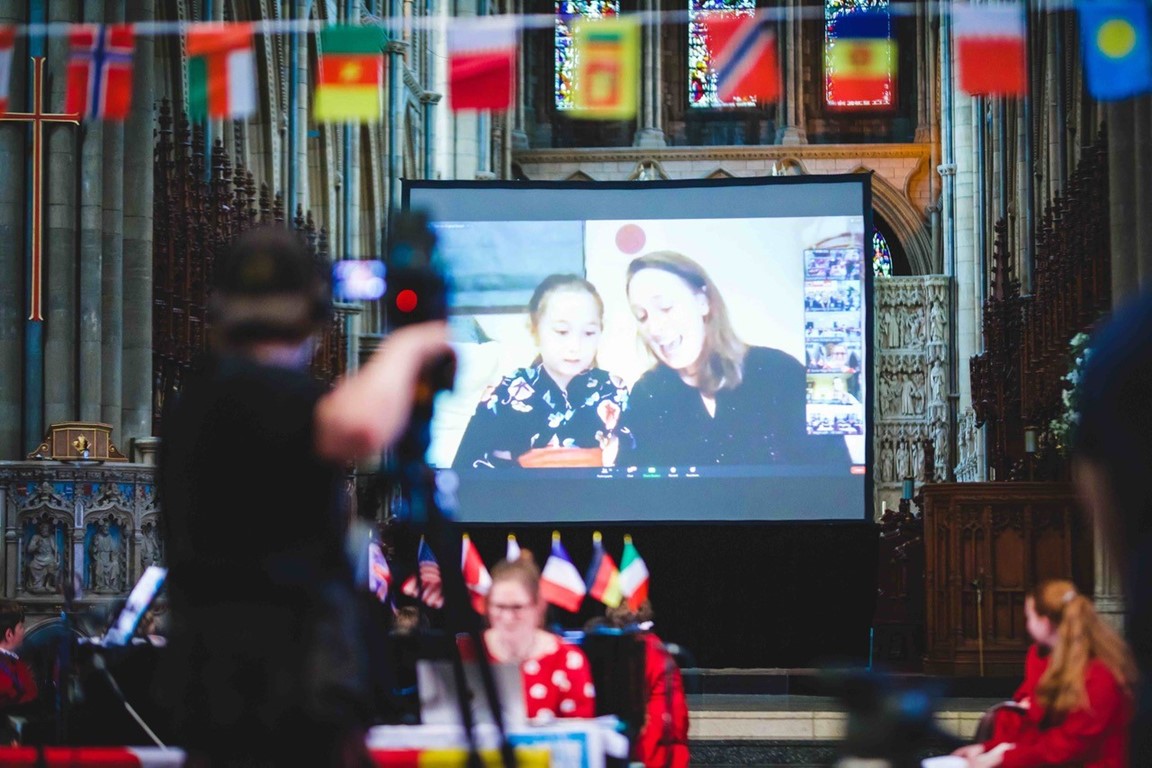 On June 9th, as G7 leaders converged on Cornwall, over 1,400 children across 14 time zones met to sing on a Sing2G7 Mega Zoom led by Truro Cathedral’s choristers, singing together Gee Seven, the song written especially for the project by Sir Tim Rice. Beaming out from Truro Cathedral the young singers included those in Toronto and Illinois who’d got up at the crack of dawn as well as children in Tokyo who had stayed up especially late to take part in the global online musical bonanza. Co-founders of the volunteer-led project, Christopher Gray, director of music at Truro Cathedral and Esmé Page, founder of Cornwall Hugs, led the Zoom which attracted four TV crews to the cathedral from where it beamed across the world. You can see the BBC Sunday Live report here: BBC Sunday Live

Sir Tim Rice was with the choristers in Truro Cathedral throughout the Zoom, and took a Q&A session at the end, fielding questions from the young singers around the world. Besides this, the children watched personal messages of encouragement from Gordon Brown, UN Envoy for Education and former UK Prime Minister, and the Bishop of Europe and Sophie Daud, CEO Y7/Future Leaders Network.

Click on the link to see the Message from Gordon Brown

Christopher Gray, Director of Music at Truro Cathedral taught international singers across the Zoom call. The Cornish Choristers who have inspired 25,000 children to sing to G7 on world issues close to their hearts then passed the leadership baton from country to country, with choirs and soloists across the globe leading the whole chorus at different moments. One of the most moving moments came when ten-year-old Japanese girl Rosa who has been been in strictest lockdown since the project launched at the end of April, led the world, singing the final chorus with its poignant challenge to world leaders to take their responsibility to the rest of the world seriously. Chris said, ’It’s always special when we bring people together in song, but it was particularly emotional to see technology allowing people from all over the world to unite on this scale. The song by Sir Tim Rice and Peter Hobbs and the message of Sing2G7 have clearly chimed with children from many cultures who are facing quite different Covid challenges. It made me think of John Dryden’s words from the seventeenth century which are no less true today: “Music for a while shall all your cares beguile.”

Sam, a young chorister from Toronto Children’s Chorus who led the global chorus at one point in the Zoom said, ‘It’s been really inspiring that we’ve been able to do this, just to have everyone from fourteen time zones come on Zoom and sing one song that was written for us. So I think that’s really cool.’

Banele who helps lead Khayelitsha Children’s Choir, in Khayelitsha Township, Cape Town, South Africa said, ‘It’s so rare to be communicating with people from around the world. It doesn’t happen every day. The children were thrilled to be part of the Zoom.’

The Mega Zoom was well attended by schools all over the UK, from Northampton to Guildford, Manchester to York as well as by many of the 80+ Cornish schools involved in the Sing2g7 project. Jess, 11, Crowan School, Cornwall said, ‘I really liked today because everyone all around the world was here and it’s really nice to see everyone.’

Co-founder of Sing2G7, Esmé Page said, ‘It was so moving to see children right across the world joining in song and to witness their courage in leading each other in a global chorus - sometimes even as soloists. It was such an encouragement to them to hear personal messages from Gordon Brown and leaders such as the Bishop of Europe and Sophie Daud who clearly recognise the strength of leadership blossoming in this pre-Z generation. Let’s see if any of the G7 leaders themselves will take time to pay tribute to the 25,0000 children worldwide who’ve made such an effort to learn about G7’s agenda and to speak and sing their mind on world issues. I hope their talks are as harmonious as the children’s singing - it won’t be long, I think before these youngsters are filling their leadership shoes!’