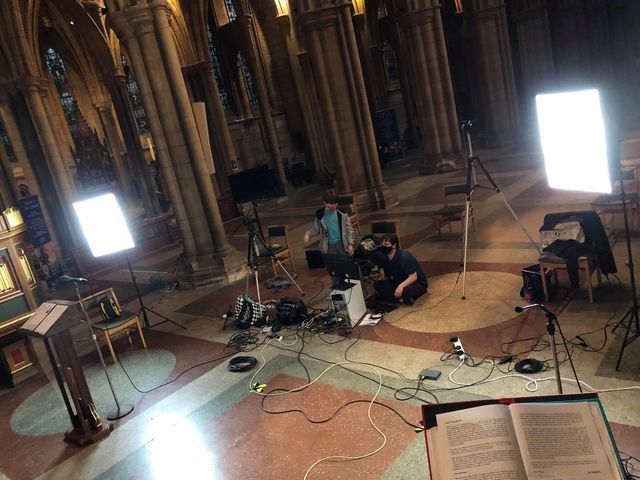 In front of the camera…

When the second lockdown was announced, the Cathedral Executive took the decision to introduce live streaming of Sunday worship with immediate effect. Although we have been given a generous gift to acquire live-streaming cameras, these have yet to be installed, and so we had to beg and borrow (but not steal!) equipment to allow this to happen from Sunday, 8th November. I am immensely grateful to all those who, behind the scenes, have made this possible, especially as it entailed spending over six hours on the Saturday afternoon and several hours on Sunday morning setting up the temporary equipment.

The results were clear for all to see: over a thousand views on You Tube (although it is quite understood that there could have been multiple views by one individual making up that number). Also live-streamed was the Remembrance Sunday service in High Cross later that afternoon, and, as I write this, we have streamed both this Sunday’s (the 15th) Eucharist and Evensong.

Prior to this we were pre-recording the Eucharist to go up on our social media channels, but the decision to go live was necessary. It does provide an immediacy and an authenticity that a pre-recorded service cannot give. The thing that struck me most was just that authenticity; it did feel like a proper act of worship. As the president of the Eucharist, I did have a few butterflies in the tummy as 10am approached, knowing that this would be a ‘public’ private service. I couldn’t just switch off the camera and start again if I made a mistake. And although I was looking out onto a trio of camera operators, tripods, cameras and yards and yards of cable, I didn’t feel as if the worshipping community wasn’t gathered. (Canon Alan was present as the preacher; the choir was not for this service.) All in all it felt like a proper service, serving those who had tuned in, or who would watch later.

There are still things to iron out. But as a principle, live streaming will now become part of what we do to provide worship. And if you think that around 30% of those who viewed the service were from overseas, it gives something of the potential this has for the cathedral and its outreach.

…and behind the camera

With less than a week between the decision to start live streaming our Sunday services and the first stream there was a great deal to do in a short amount of time. The cathedral has very little of the equipment needed to live stream and we are truly grateful to the cathedral team, our volunteers and other stakeholders who have allowed us to borrow their equipment to make this happen.

A very small team of cathedral staff and volunteers formed and worked rapidly to coordinate a plan using the equipment that we now had available and how we could get our services out to you all. Finding a way to make 3 different SLR cameras talk to 3 computers with the right lighting and with the audio synced to the video was the work of a wizard of a volunteer who worked his magic to make it all work through a single piece of software. We’d have been scuppered without his support.

Cue Saturday afternoon when our small team met at the cathedral (all due safety and distancing measures in place) to put together the 3D puzzle of equipment and started ironing out the various technical issues as they presented, and there were several! 6 hours later, by the early evening we had got there, it worked, and we felt ready for Sunday morning.

On the Sunday morning there was a definite sense of excitement and nervousness with 10am, the start time of the service getting ever closer. And then we were live with each team member settling to concentrate on where each camera was pointing, making sure we were in the right place at the right time. Communication only through glances, nods and the occasional pointed finger or waved hand. Text messages to colleagues to ask if it was working ok and regular tweaks and fine tuning to the sound and video throughout.

Before we knew it the service was concluded, and we’d done it. We were delighted with the feedback that we received from viewers which started coming in almost immediately. As ever, we’re our harshest critics and we’ll continue to refine what we do over the coming weeks to give you all the best possible way to experience our services while you can’t be here with us. We’re not the BBC and nor will we ever be, but we strive to give you the closest experience to being with us as we can.

As the Dean has said, now that we have started live streaming our Sunday services we are committed to maintaining this into the future. We look forward to the day in the coming weeks when the fixed webcasting equipment is in place and working and developing a small volunteer group to give us the resilience to do this week in, week out. It’ll certainly make the streaming much more straightforward and upgrade the quality too also giving us the potential to live stream more of what takes place in the Cathedral in the future. Watch this space…