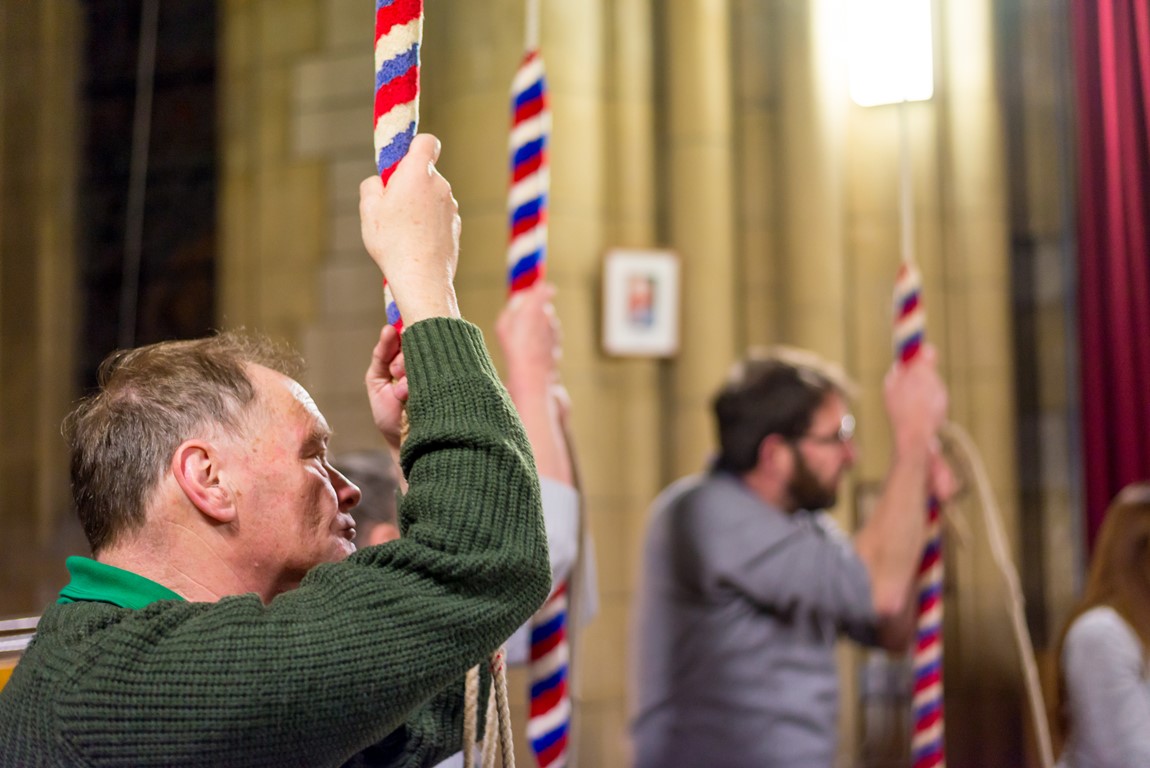 While the sound of our cathedral bells, on a Sunday morning perhaps, or on Tuesday evenings when we practise or at other times, may for many of us be something which we take for granted it does seem very probable that Pearson’s original design for the cathedral did not include the installation of ringing bells.  Two indicators which suggest that this was the case are, firstly, the fenestration of the two west towers, which differ so as to allow for the bell-chamber in the north-west tower rather than being built to the same design, and, secondly, the fact that in 1904 the Chapter spent quite a lot of money on the purchase and hanging of the clock bells in the “green” spire above St Mary’s Aisle – had the provision of ringing bells been planned at the time it must be likely that the clock would have been installed so as to strike on the tenor bell there.   But be that as it may, in 1910 our glorious ring of ten bells was hung and dedicated, along with the completed western towers, on 21 June in that year.   Why ten bells, rather than eight or twelve?   We shall probably never know the answer to this question, although it may be that by having ten bells the Cathedral would have had a greater number than any other Cornish church, and maybe no more than ten donors could be found.   But in any event, the ten bells served us very well for just over 100 years.   In 2011 four more bells were added, two of which complete a diatonic ring of twelve with the other two enabling us to enjoy a lighter and more manageable ring of ten.   I know next to nothing about music myself, but those who do understand the subject assure me that it is something to do with the use of semi-tones!

In the British Isles, and overseas too in countries with a historic link to the United Kingdom, church bells are rung by rope and wheel – the rope engages with a groove cut into a timber wheel attached to each bell, and the ringer moves the bells through a complete circle in one direction and then through another one in the opposite direction.   Each “stroke”, as we call these operations, produces a note from the bell.   Rather than use the different notes of the bells to play a tune as such the ringers either follow an instruction called by a “conductor” to swap places in the order in which the bells are being rung, or the ringers all follow a pre-memorised pattern and change positions at each stroke without any instruction being called.

Our bells are rung twice each Sunday, before the and evensong, and again on Tuesday evenings.   We welcome visitors to the ringing chamber if they wish to see what we do, and we are always on the lookout for new recruits to what is not only a fascinating hobby but a service to the church.  Please do get in touch with me if you’d like to know any more.