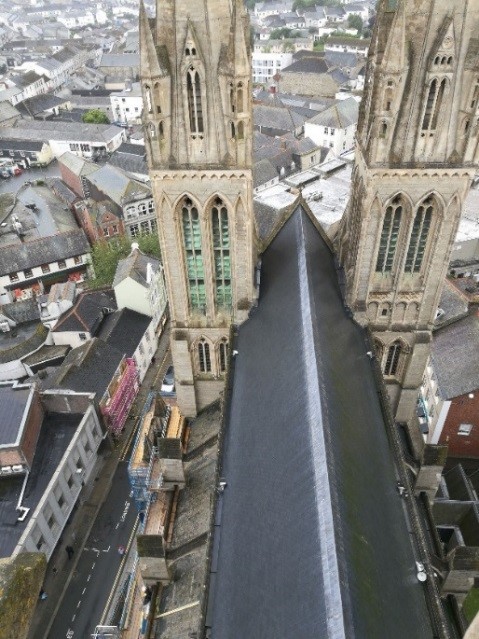 A national scheme to conserve and repair England’s cathedrals from which Truro cathedral was awarded £1.05 million has significantly reduced immediate risks, a report published yesterday said. The £40 million First World War Centenary Cathedral Repairs Fund, launched by the Government in 2014, invited applications from Catholic and Church of England cathedrals to address urgent repair works. The fund prioritised making buildings weatherproof, safe and open to the public as well as ensuring they would be in a safe condition to host acts of remembrance for the centenary of the First World War armistice in 2018.

Truro Cathedral Received a total of £1.05 million, including £50,000 to undertake preventative work on mullions on the north west and north east spirelets in 2014, and £1 million towards the cathedral’s £3.2m roof appeal, enabling the completion of the re-slating of the western arm of the cathedral roof in 2015 and 2017.

In total, the roof appeal has so far raised £1.47m, leaving just over £1.7m to raise. January 2018 marked the completion of the second phase of physical repairs, with 30,230 of the total 60,000 slates now replaced. The planned third and final phase will replace all slates on the eastern arm of the cathedral. It is hoped physical works will complete in 2020 but this is dependent on securing the remaining funds needed.

Today’s independent report shows a significant reduction of problems requiring immediate repair as a result of the investment but warned that recipients all had outstanding repairs in areas not covered by the scheme.

Grants were awarded by an independent panel chaired by Sir Paul Ruddock, a position appointed by the Secretary of State. The Fund was administered by the Church of England’s Cathedrals and Church Buildings Division (CCB) on behalf of the Department for Digital, Culture, Media & Sport, with the CCB praised in the report for cost efficiency and excellent communication.

The report concluded that the fund had been successful in achieving its aims and met a funding need that could not be met elsewhere, adding that areas of cathedrals covered by grant-aided projects had been very largely changed from needing urgent repair to needing routine maintenance only.

In 2014, Truro Cathedral commenced ‘Cornwall Remembers’ - a four-year project to commemorate World War One in Cornwall. It has been run by the cathedral in partnership with individuals, local community groups and organisations.

Over the four years, the cathedral has hosted many commemorative events and services marking significant moments during the war. A major focus for these was August and November 2014 when the cathedral held a series of talks, displays and concerts that focused on many aspects of the War and its significance. The programme has tried to show that the War had many faces, and explored something of the horror, the courage and the determination of people not to be overcome by despair that the War consistently evokes. This autumn Truro Cathedral is providing another series of events to commemorate the end of the conflict, culminating on Sunday 11th November 2018 with a poppy-drop from the cathedral’s central tower.

The Dean of Truro, the Very Reverend Roger Bush, said: “Truro Cathedral sits at the very heart of our community and is a place that touches the lives of tens of thousands every year. The grants received from the fund have enabled us to undertake significant portions of the repair works needed in order to preserve and protect the cathedral, not just for those experiencing the cathedral today, but for generations to come.”

The Bishop of Worcester, Dr John Inge, the Church of England’s lead bishop for churches and cathedrals said: “Cathedrals such as Truro are at the forefront of the nation’s acts of remembrance each year, and have huge economic, spiritual and missional impact on their communities.

“This fund has been an imaginative and welcome resource to ensure our cathedrals are fit for this commemoration, as well as underpinning the vital contributions they make to their communities.

“It is vital that we do not stop here, and continue our commitment as a nation to protecting Truro and all England’s cathedrals for generations to come. We look forward to continuing a constructive dialogue with the Government around future funding collaborations.”

To read more about  the roof restoration project, please visit the restoration section of our website.

Thank you. You are now subscribed
Thoughts and thanks to all who support the cathedral
January 2020
Christmas in the cathedral shop
Celebrating 30 years’ service